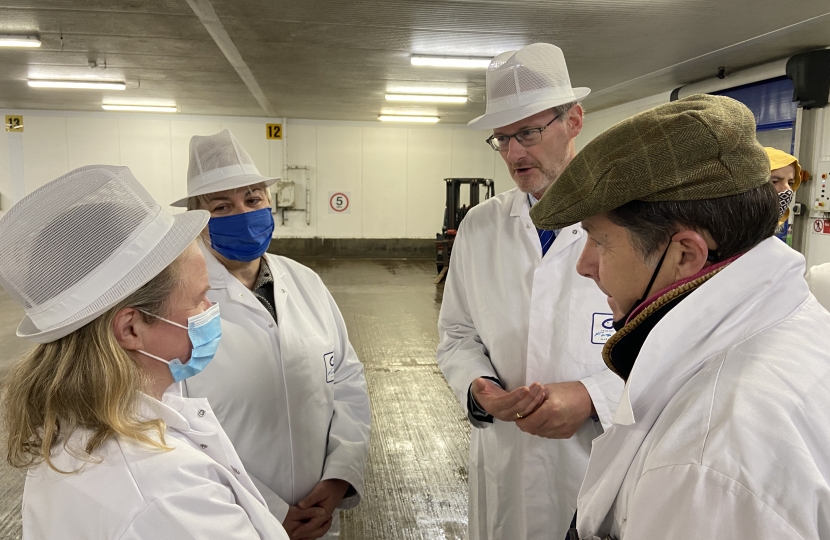 Felicity Buchan MP, the Prime Minister’s Trade Envoy for Iceland and Norway visited Grimsby to learn more about the important trade and historical relationships the town has with both countries. We were hosted at Grimsby Fish Market by CEO Martin Boyers who explained how the fresh fish is imported by container ship into Immingham and then transported by lorry into Grimsby.  Other routes for fresh and frozen fish also come into the town from other ports around the country and also by air from East Midlands Airport.

We were joined on the tour by Martin Vickers MP, Jonathan Goolden, the Icelandic Consulate, where in addition to visiting the Monday morning auction, we had the chance to visit the numerous specialist fish processors who are based at the Fish Docks.  It is always fascinating to see the different specialisms and markets that are supplied by the expert teams in Grimsby.  And even though Grimsby also has a very small catching sector compared to decades before, the town is the biggest fish processing sector in the UK, directly employing approximately 6,000 people locally.

Later, Felicity and I attended the Dock Offices, hosted by Associated British Ports (ABP) and Simon Dwyer of the Grimsby Seafood Cluster, with its #madegreatingrimsby brand, which celebrates the international expertise we have in the town.

Iceland Consul, Jonathan Goulding said, “It is an absolute honour and pleasure to welcome the Prime Minister’s Trade Envoy here to Grimsby.  It is vitally important for us to showcase what we do here in Grimsby. The cultural and trade links between the three countries run very deeply here.  Iceland and Norway’s trade is very valuable to us and vice versa”.

Felicity introduced herself to a broad range of company owners: Simon Smith, CEO of Youngs Seafood; Wynne Griffiths representing the Fishmongers Association; Mike Woods of the Fish Merchants Association; Marcus Coleman, CEO of Seafish Industry Authority; Rad Wiatr, Cook & Lucas; Andrew Oliver, Chair of the Grimsby Auction Market; Jonathan Reed, CEO of Hilton Foods PLC; Patrick Salmon of Alfred Enderby; and Mike Hryckowian of Pelagia. We explained to Felicity that Grimsby alone is hugely important for trade with Iceland and Norway, both in terms of fish imports and the renewable wind industry. We discussed the challenges that faced the seafood industry that leaving the EU had created, but we also discussed the opportunities that lie ahead for all parties in the future.